Ever wondered what a Guest Relations Manager does? If your answer is YES! Then find a comfy spot on your couch (because we all have one) and get ready to meet Guest Relations Manager, Justin Botha. Justin works at South Africa’s leading hotel, The Oyster Box, which is nestled in the heart of the prestigious Umhlanga Rocks in KwaZulu-Natal.

Before we unpick the role and responsibilities of a Guest Relations Manager, let’s backtrack to the year 2010. Not only was it a significant year in the history of South Africa with the FIFA World Cup  “Waka Waka (This Time for Africa)”, but this was also the year that Justin graduated from the International Hotel School with his  Diploma in Hospitality Management.

Once Justin had completed his final exams, he stated working for Coca Cola Germany during the 2010 Fifa World Cup. Immediately after that he successfully managed a Guest House that was based in La Lucia, he then went onto to work in Miami at the Boca West Country Club in banqueting, and after that he worked in the Food and Beverage Department on the Yachts of Seabourn. Upon returning to South Africa Justin worked at The Belaire Suites Hotel as a Night Manager for a couple of years, “During my career, I decided to take a gap year and try my hand at business. However, I missed the Hospitality industry and I managed to get the opportunity of a lifetime! I began working as a Guest Relations officer at The Oyster Box and then I moved up the ranks to Guest Relations Manager,” smiles Justin. 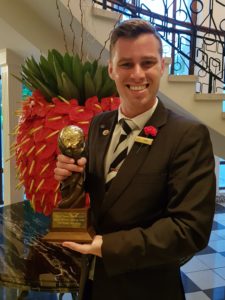 The Oyster Box Hotel collected the trophy for being South Africa’s leading hotel at the recent World Travel Awards 2018.

“Since I started working at the hotel my position has afforded me the opportunity to meet people, who you would normally dream of meeting: From Presidents to Royalty, International celebrities to people that have been massive change agents in our country. I’ve met the renowned Bill Gates and the magnificent Thuli Madonsela. Both individuals have massive auras,” says Justin. “Meeting new people is just one of the many reasons as to why I love this industry. You get to build lifelong friendships and it also allows for you to make positive impacts on people’s lives, which is very rewarding. Furthermore, as long as you love what you do, you will be good at it and success will be guaranteed. I firmly believe that you will get what you put in,” concludes Justin.

Now that we’ve gotten to know Justin a bit better we can now learn the duties and functions of a Guest Relations Manager:

What are the main areas of responsibility as a Guest Relations Manager?

“To ensure that every moment of a guests stay exceeds their initial expectations. Should there be an issue, this should be dealt with immediately. I have to ensure that my staff conform to the rules of the Front Office Department. The Red Carnation Group have a standard of using TNT’s (Tiny Noticeable Touches) to enhance a guest’s stay. These are mostly planned and must be creative, original and implemented according to the guest’s need. I must also design and implement new procedures as well as increasing productivity. One of my proudest career achievements has to be the Designing of Standard Operating Procedures for Guest Relations at The Oyster Box.”

What are your tips to dealing with an upset guest?

“Guest it right the first time 😊 – Every guest should be handled as an individual. The most important part of dealing with an upset guest is attentive listening. Sympathise with the guest, but do not accept responsibility for something that is not yours or the company’s fault. Be efficient if dealing with the complaint and ALWAYS FOLLOW-UP”.

Who does a Guest Relations Manager report to:

The Guest Relations Manager reports to the Front Office Manager the General Manager.

A Guest Relations Manager must have:

If, like Justin, you are passionate about the hospitality industry, the International Hotel School has a Hospitality Management programmes that will suit you.  Contact us and we can help you to open those doors or you can join us at our Open Days.

Part of the Invictus Education Group